Thanks everyone for all of the great response, I was sure there were going to be some haters since the first strip IS pretty retarded. You all made it much easier for me to post the second strip. My test group says the strips get better and better, so if you liked the first one you'll like the rest.

The second strip is kind of about Chinese food and finding love. For me it's mostly about inconsistency. Part of my dayjob is to catch all of the inconsistencies between scenes and pose hook ups which can sometimes get ridiculous. This strip is my outlet where I allowed myself to not care about consistencies (you probably wouldn't have noticed if I didn't point them out). 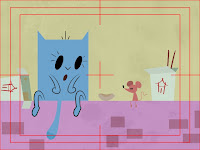 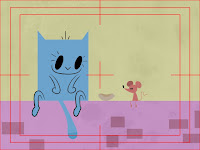 Between the first and third shot the Chinese food goes missing. 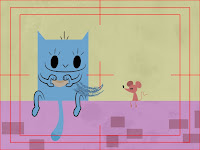 Not an inconsistency, just some digital drybrush. 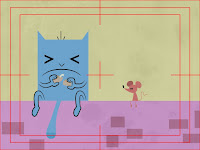 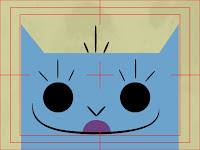 This expression doesn't hook up. 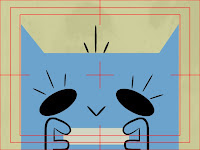 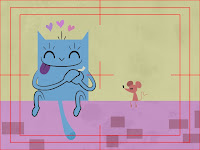 Notice how I didn't bother with lipsync, I'm lazy!
Thanks to Shawn for building the Prophet Buddy site for me, you should go check out his new site, it's pretty silly. Also, thanks to Aaron and Cold Hard Flash for the launch post.
Posted by Prophet Buddy at 12:00 AM

I love how Prophet Buddy is going so far, just the look of it alone should convince anyone to watch it.

Do you think you could go into how you actually assemble one of these strips?

i like the final expression with the 3 horizontal lines for eyes, is that a pringle original creation or have you seen that somewhere before?

thanks for the entertainment!

the three lines I have seen before in anime. There's something about it that I really like, it's not used enough in animation if you ask me.

I'll make an attempt to show how the strips are made. it might end up taking more time to document making one than actually just making one.

This makes me certain of how much more productive a studio crew would be if nobody worried about those insignificant details you call "consistency" and "hook-ups."

It's Josh, the ex-foster's intern, I stumbled across the prophet buddy blog and think its great. They look really good, simple yet incredibly expressive. The animation is really fun, very spumco-esque.

I think the best part is that the theme song is like, an epic indiana jones/sitcom intro, really really funny.

They have inspired me to make a little animation.

Thanks for the kind words, it was really awesome reading that message, and it truly means a lot, especially coming from someone who's been featured on John K's blog.

Yup, I'm really making a short now. Prophet Buddy was that inspiring. I put up a couple images from it on my blog.
I think I might stop by the studio on monday, and if ur not too busy i'd love to get some feedback from you.

PS (I'm officially unemployed and a college dropout, so if you have any hot job leads or suggestions on where to look, i'd appreciate it.)